My name's Daniel (a.k.a The Smoothie Guy). I'm the creator and founder of Spinachy.com. I created this blog to share my experience with people who would like to start living healthier, happier and more productive life.

I believe that eating healthy can be simple, quick, affordable and delicious. By following my blog you'll learn how to lose weight, improve your physical and mental health and also boost your energy levels with the help of green smoothies and whole foods diet.

Four years ago, I was 60 pounds overweight. Due to lack of knowledge back in the day, I tried every fad diet to lose some weight.

But nothing worked for me…

I was desperate and frustrated at the same time. I was about to give up until a green smoothie recipe popped into my Facebook‘s newsfeed. The recipe claimed that it burns fat in no time.

I was not a fan of green food. In fact, it was hard to even force myself to try it because I thought it must taste gross. However, everyone was talking about the recipe on Facebook, so I decided to give it a try since I had nothing to lose.

When I finally tried it, I was astonished of how wrong I was!

It was delicious! BUT I was not losing weight… Quite the opposite, I even GAINED some weight!

I tried more random “weight loss” smoothie recipes and nothing! After many unsuccessful attempts, I began thinking that green smoothies were just one more fad….

Luckily, I met Health Coach Drew and became one of his private clients. By the way, you've already met him when he was introduced to you with the top health benefits of green smoothies.

“Green smoothies haven’t worked for me.” I told him.

He explained that not every recipe does what it says it will and suggested that I try his own smoothie recipes from his 21-Day Smoothie Diet Program.

They tasted delicious and worked like magic! Soon after, I lost 20 pounds in 3 weeks and 40 more pounds in a few months.

I was eager to find out what‘s the secret behind his recipe and why did they work so well compared to others.

„Smoothies do NOT help you lose weight… but the RIGHT ingredients can transform your body fast. You can‘t trust random smoothie recipes found online because most of them contain unhealthy ingredients that make you GAIN weight. And you don‘t want that!“ He explained.

Four years later, green smoothies are still one of my favorite ways to lose weight quickly. You know, when the holidays make it all too easy to cheat! I have been having them almost every day. My weight has gone down dramatically; I’ve never had so much energy; and my general health is in tip-top shape.

Through those years, I've gained a lot of knowledge about green smoothies and a whole food diet. That's why I'm ready to share my experience with you. 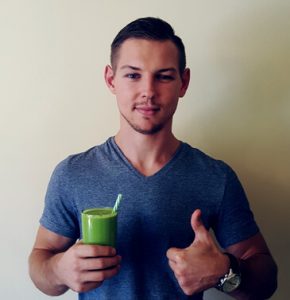